May 2 was National Day of Prayer in the United States, a day Congress set aside in 1952 for Americans to turn “to God in prayer and meditation at churches, in groups and as individuals.” But many Americans pray every day – not just on the Day of Prayer. Indeed, out of 102 countries examined for frequency of prayer by Pew Research Center, the U.S. is unique in that it has both a high level of wealth ($56,000 per-capita gross domestic product in 2015) and a high level of daily prayer among its population (55% according to the 2014 U.S. Religious Landscape Study).

In every other wealthy country surveyed – that is, those with a per-capita GDP over $30,000 – fewer than 40% of adults say they pray every day. For example, in Japan, where per-capita GDP is about $38,000, roughly a third (33%) pray daily. In Norway, where per-capita GDP is about $68,000, fewer than one-in-five adults (18%) do. (It’s worth noting that the surveys did not include wealthy countries in the Arabian Peninsula, such as Qatar and the United Arab Emirates, which might be expected to have high levels of prayer.) 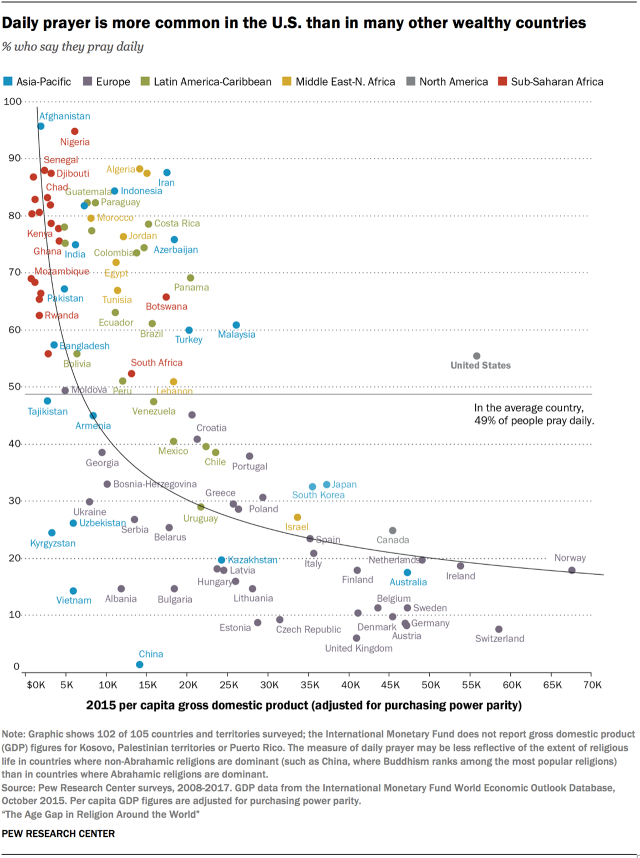 These findings are broadly aligned with other data that suggest that a country’s level of wealth is inversely proportional to its levels of religious commitment as measured by survey responses about daily prayer, belief in God, attendance at religious services and stated importance of religion in one’s life. In other words, people in poorer countries tend to be more religious than people in wealthier countries. (For more on this, see our 2018 report.)

That said, not every country with low wealth has a high level of daily prayer. In Vietnam and Bulgaria – where per-capita GDPs are $6,000 and $19,000, respectively – the shares of adults who say they pray daily are 14% and 15%. (Among all 102 countries examined, the national average share of people who say they pray daily is 49%.) 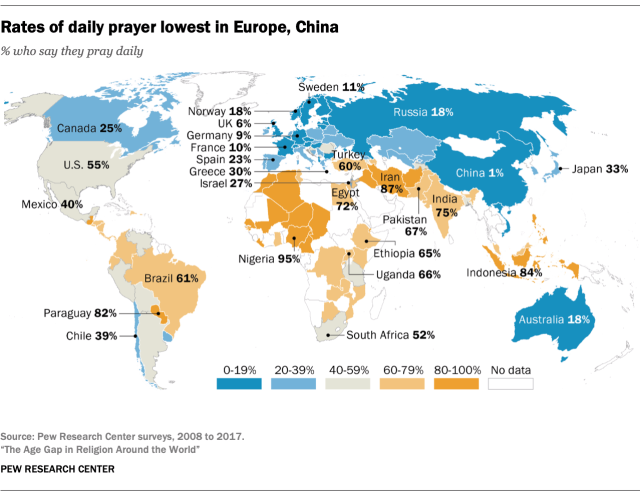 Why does the U.S. have higher self-reported daily prayer than other wealthier countries? Some scholars posit that the lack of government interference in religion in the U.S. has created an open religious “market” – a landscape where different religions enthusiastically compete for new members. High levels of prayer also could be due in part to relatively high levels of income inequality in the United States; societies with more unequal income levels tend to be more religious.

China is destroying our world, literally

The Greatest Scientific Advances From the Muslim World

Islam and Slavery – Why Debates over Slavery are Matter to Everyone